I’ve been wanting to make I Was A Landscape In Your Dream for a couple of years now. In 2010 I made a small chipboard version that is 1.75″x8.75″x8.75″. It is made of 25 layers. I started it by cutting 25 pieces of chipboard that were the same size and sketching out the top layer and then cutting it out with an angled mat cutter. I laid this over the second layer and drew a line as close as I could (within an eighth of an inch) to the layer above and cut that out. I did this until the shape was too small to cut. I made the piece thicker by adding uncut layers to the bottom.

I enjoyed making this because it reminded me of a project that I made in art school for my three dimensional drawing class. It was a very intense class and focused on developing rendering skills for drawing in perspective. We learned how to accurately draw objects in three dimensions, cast shadows properly, shade (using the proper pencil for even shading without using too much pressure), use a knife, and eventually, build objects. One of the assignments included making small square designs out of chipboard. The rule was that no layer could overlap another and the edges had to be clean (not cut with a dull knife). I think we had to make somewhere around 20 of them and use the best 16. It was a hellish class and the students in the class that semester would be in the studio late at night working on their assignments all week and weekends. It was worth it though since I learned how to draw imaginary 3 dimensional objects with shadows and learned how to use a cutting knife. For one assignment we had to design an object by drawing it first with shadows as it would look on a wall, separate the layers and cut them out of Masonite and then put it together, wood fill, sand and paint it without any layers showing. My friend Jim and I cheated though by using a type of paint that made it look like stone, which also conveniently covered up the mistakes. I got an A on the assignment but he banned the use of that paint the next year. I’m glad I still use these skills, including “cheating” sometimes. Now it’s called problem solving.
Anyway, I plan on making a larger version of I Was A Landscape In Your Dream out of wood that will be 11″x22″x22″. It will eventually sit under a glass table so it functions as both a sculpture and as a piece of furniture. I sort of dislike the idea of using art as a design element so I was interested in this cross-over in my own work, and think of it as being a little tongue in cheek. For 2 summers now I’ve planned on making it, needing the warm weather to do all of my cutting and sanding, but its cold again so I might not make it until next year. It’s a logistical problem since I need all of the wood to be exactly the same size so that the edges will create perfect sides in the end. I think I’ve figured out how to make a jig for this using some wood and a circular saw. I may paint it white in the end which will require wood filling and sanding.

I also made a series of drawings that I consider contour drawings of I Was A Landscape In Your Dream that preceded the original chipboard version. The idea for this was more conceptual, in a classic sense, meaning that I set up ground rules for how I would make them and then let their final outcome be dictated by the rules. So I decided on a size and then started by making as straight a line as I could across the top free hand. I then went back and made another line underneath the original line, trying to follow as closely as I could to the line above. I did this until one side reached the bottom of the page for one series. In another series I continued until the whole page was full. I did some in blue ball point pen and some with black ball point pen. Some I did horizontal and some I did vertical. Some I turned upside down. After 16 of them I stopped, feeling that I explored this idea as far as I could. I really like the look of blue ball point pen although it is not very archival and will fade in the sun very easily.
The title is taken from a song of the same title by the band Of Montreal. 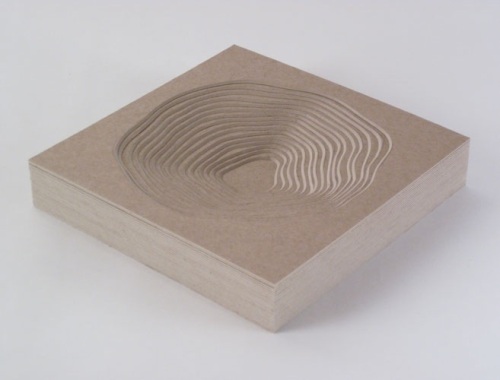