Here are the last 3 in the series, making it a total of 15 drawings. There was a mistake in #23 and somehow it ended up too tall; it’s supposed to be 3 inches tall but ended up at 3.5 inches. I’m glad to be done with these. I often get bored with long series of work. #1 was actually the last one that I finished because I skipped it accidentally. 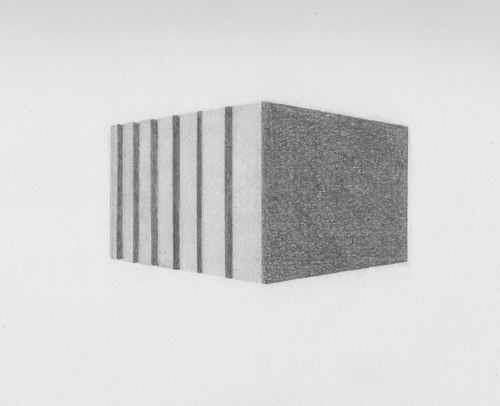 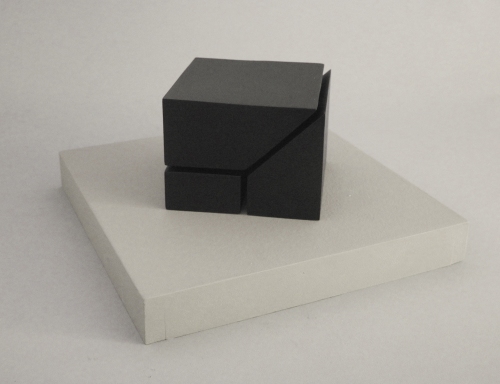 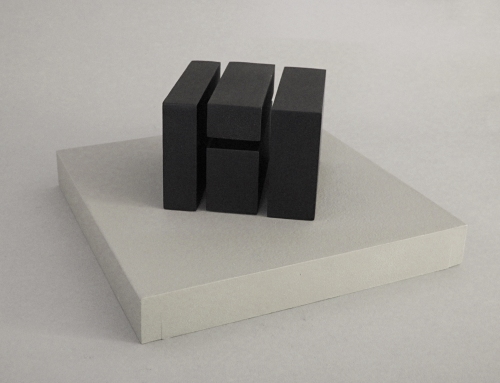 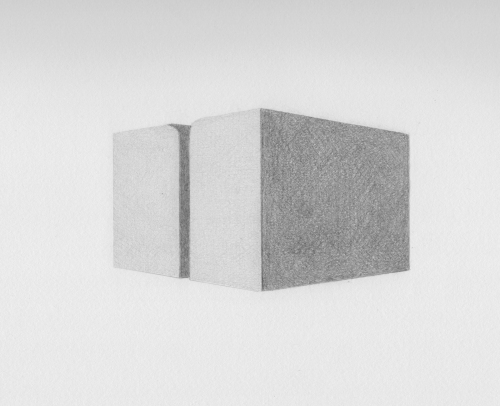 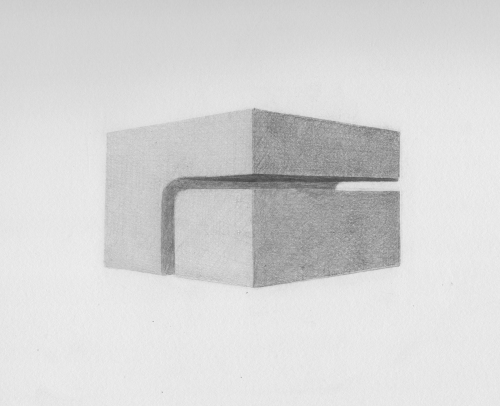 This weekend I finished the small scale sculptures #1 and #18 from the A Theory of Forms and Ideas series. They needed a lot more work than I thought from when I last posted. #1 is especially complicated since the joints needed a lot of sanding to hide the seams. One of the things that I’ve been wrestling with is the lack of accuracy in the cutting of my blocks which means that I either end up recutting the pieces or doing a lot of sanding. I bought a new chop saw and even tried using a scroll saw which didn’t cut the way I wanted it too. I’ve settled on knowing that the sculptures will all be less than perfect but I don’t mind too much as long as they look good from a certain distance.

The title of this series comes from Plato. Here is a brief synopsis from Wikipedia:

Plato‘s theory of Forms or theory of Ideas asserts that non-material abstract (but substantial) forms (or ideas), and not the material world of change known to us through sensation, possess the highest and most fundamental kind of reality. When used in this sense, the word form or idea is often capitalized.  Plato speaks of these entities only through the characters (primarily Socrates) of his dialogues who sometimes suggest that these Forms are the only true objects of study that can provide us with genuine knowledge; thus even apart from the very controversial status of the theory, Plato’s own views are much in doubt. Plato spoke of Forms in formulating a possible solution to the problem of universals.

Here are the photos of #1 and #18 on a shallow pedestal that I made and painted gray. I’ll probably wait and take the final photos for these pieces when I’ve finished the whole series to make sure that I have consistent lighting and placement for all of them.

A Theory of Forms and Ideas in Progress

Here’s a photo of A Theory of Forms and Ideas #1 and #18 in progress and the pages from my sketch book that I use for measurements. The building of these sculptures requires a little bit of strategic planning since I need to paint the middles first since I won’t be able to paint them later once it is glued together. #1 has balsa wood spacers in it to keep the insides from getting dusty  and to keep wood filler and gray primer out of the center spaces. I should be done with these soon. 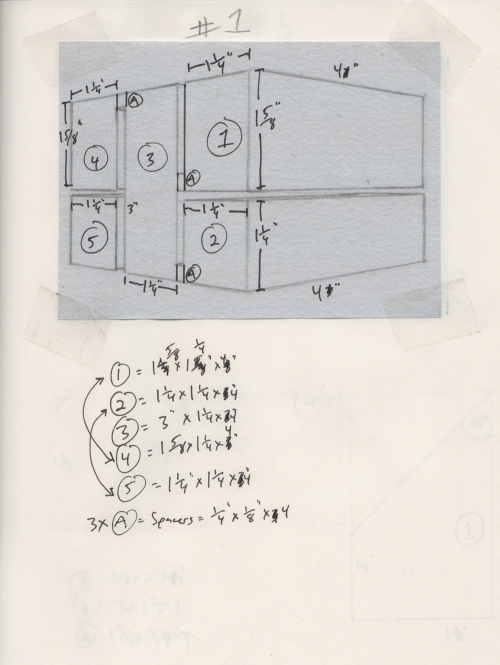 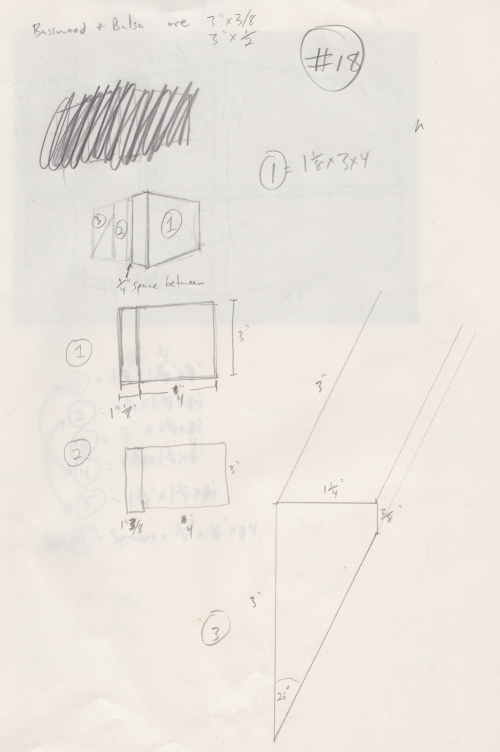 A Theory of Forms and Ideas Drawing Sketches

Here are all of the working sketches for A Theory of Forms and Ideas. These were used to accurately render the gouache paintings in three dimensions. It’s easy to see the process that I’m using to create the illusion of three dimensions using two point perspective.  For these I wasn’t interested in shading and was instead only interested in depicting the lines of the forms for future reference in the final drawings. 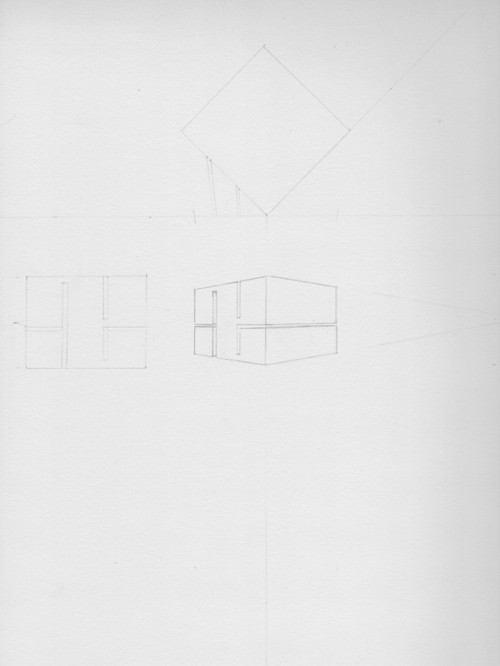 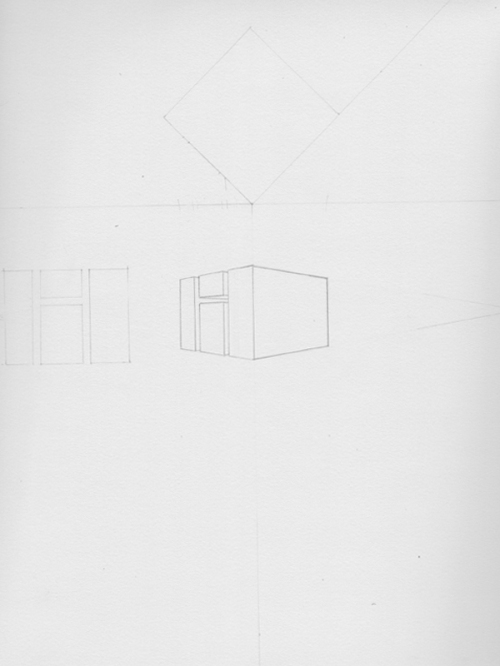 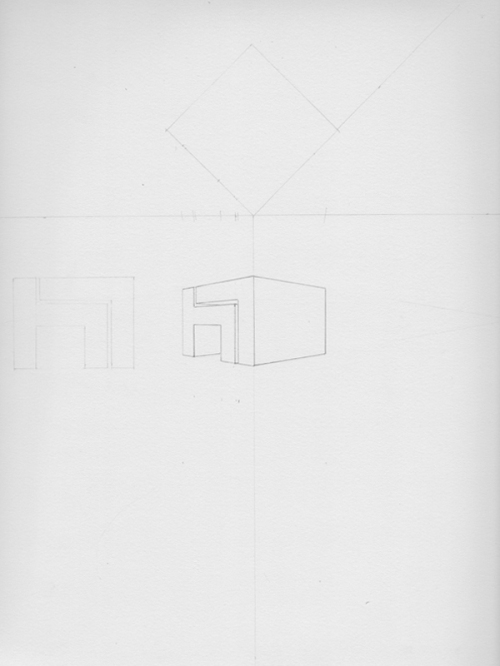 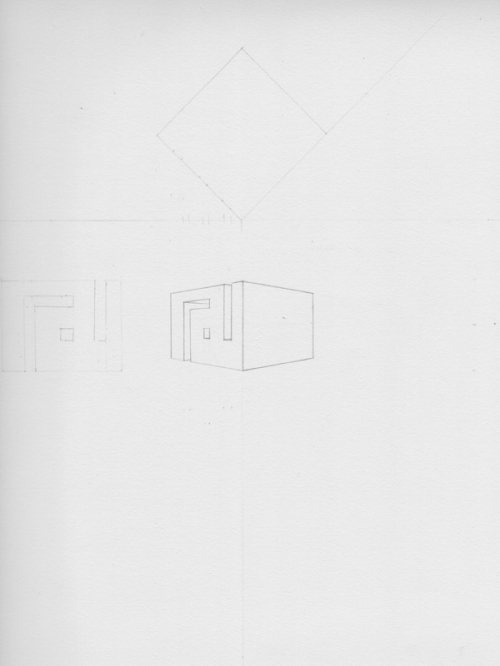 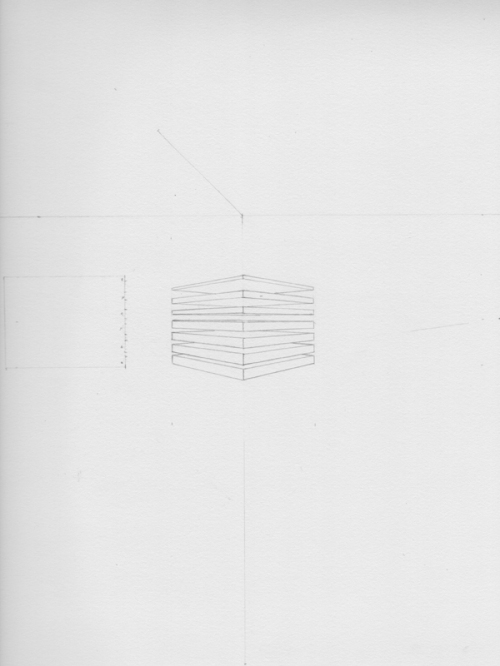 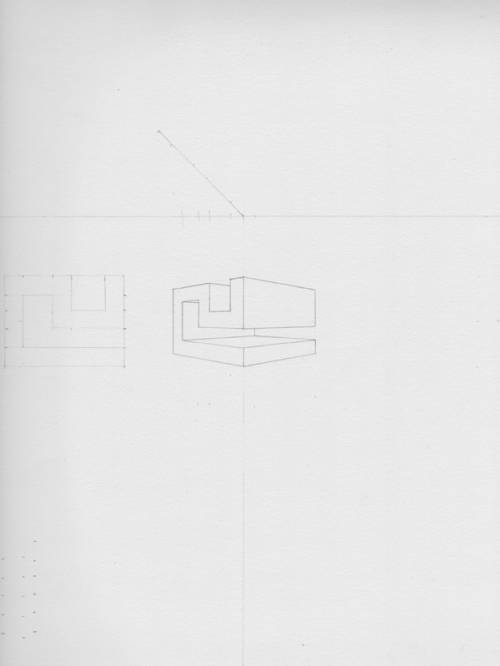 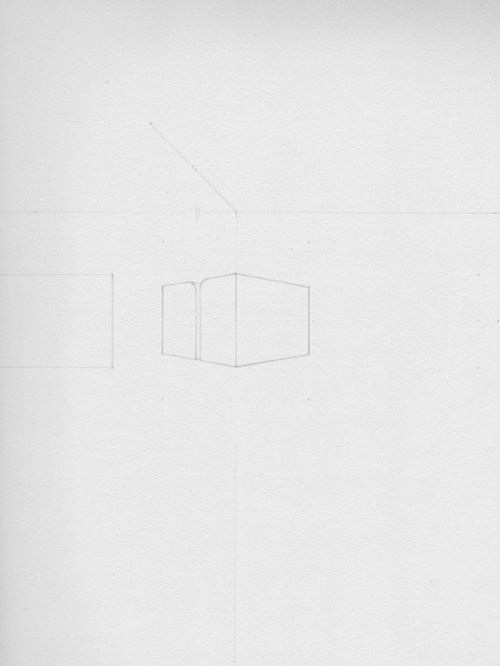 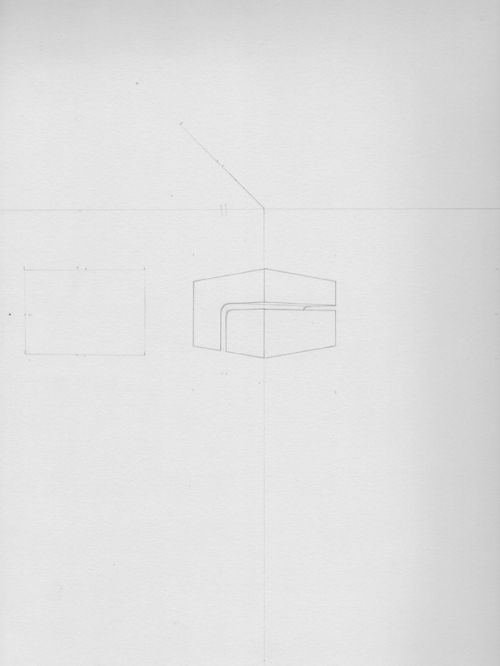 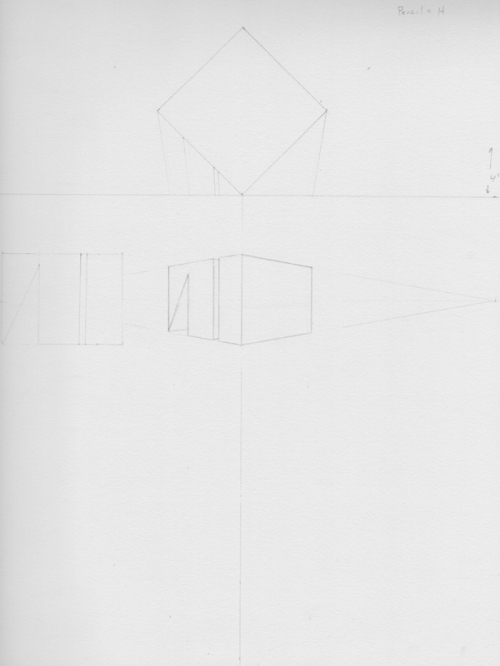 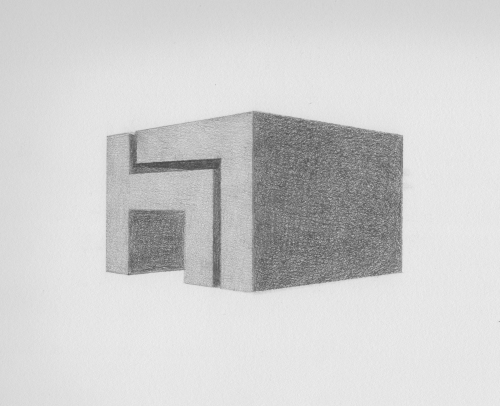 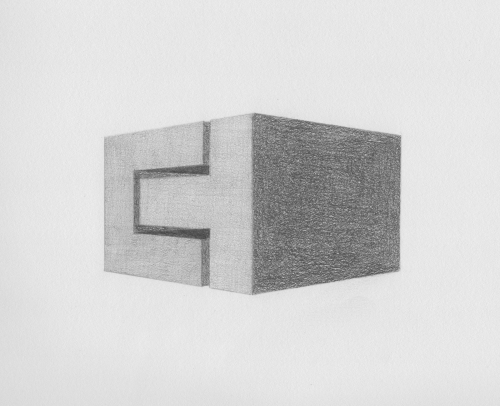 This past weekend I went to Cape Cod for Labor Day weekend and had the opportunity to revisit the dune shack that I had stayed in back in 2008. The dune shacks are on the north-east coast of Cape Cod near Provincetown and are easy to access by simply parking your car and hiking into the dunes towards the sea. Here’s some information about them:
There are only 19 of them .
They built by the Life Saving Service in the 19th century to house seamen.
Jackson Pollock, Eugene O’Neil, Norman Mailer, Jack Kerouac (who wrote part of On the Road in a dune shack) and Tennessee Williams all spent time in dune shacks.
The properties came under the aegis of the National Park Service (NPS) in 1961.
The dune shack that I stayed in was called the Fowler Dune Shack and is run as an artist residency. It had no running water or electricity so I had to bring in my own bottles of water and I used kerosine lamps at night to see. I stayed there for 7 days and spent most of my time meditating, reading, going to the beach and drawing. I remember that it was hot and there were no trees to shade you from the sun so it was unbearable to be out in the middle of the day. I would often get up early and start my day with meditation. After I was finished meditating I would have breakfast and coffee and then pump water from the well to use for the outdoor shower which consisted of a large blue barrel full of water, a hose and a shower head. The barrel and the hose are on the roof and as the sun begins to beat down on it it heats the water trapped in the hose and the barrel. By 3 or 4 in the afternoon there’s enough hot water to take a nice warm shower. After filling up the water barrel I would sometimes go for a walk by the beach, which was just over the bluff, or go check out other dune shacks in the area. By noon it was impossible to be out in the sun so I would usually hang out on the shady porch reading or drawing. In the afternoon I would often go down to the beach again, take a shower and then make dinner. After dinner I would meditate again and then spend the rest of the night drawing by the light of a kerosine lamp.
The night sky out there is incredibly clear, making star gazing an awe inspiring experience. I had the idea of making a drawing of the night sky while I was there but this proved to be too difficult and instead made a drawing of the night sky that was made up. This was the second or third time that I used the night sky as subject matter and have since used it again, but unsuccessfully. I’ll get it right one of these days.
I decided to do some still life drawings while there in the style of Andrew Wyeth who was one of my favorite artists when I was younger. I still think that he is fantastic draftsman and painter and he has the ability to create a mood and psychology while maintaining a simplicity to his style. I enjoy drawing from real life but I don’t often do it because, although I think hand skills are important, I believe that the subject should be interesting in order to pursue it in a creative context. I never did anything with these drawings nor have I done any drawings like this since.
Here are some photos of the shack and some of the drawings that I did. 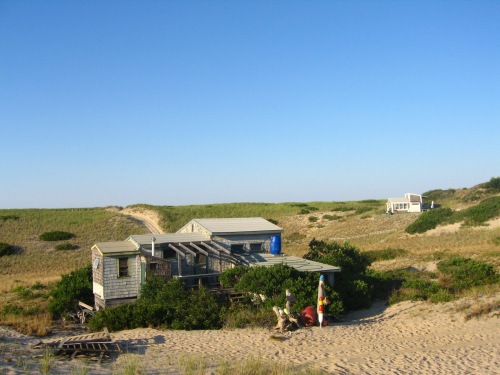 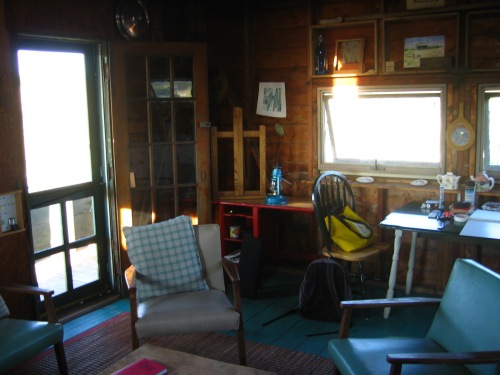 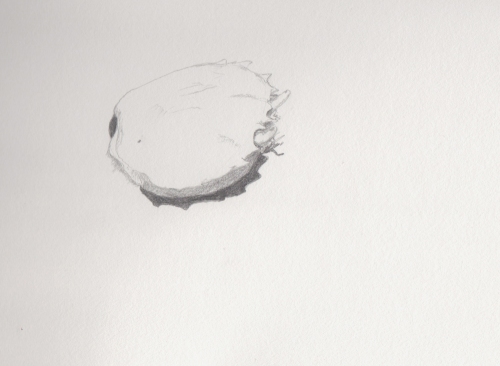 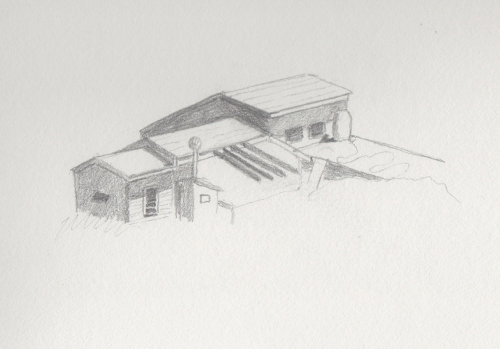