Exhibition with Artcodex at Quartiar in Den Haag: Ghost Modernism and The History of Progress, Violence and the Modern Spectacle

I’m in Den Haag installing a show at an artist run space called Quartair. This is what their website says:

Quartair was founded in 1992 as a non-profit organization by a group of young artists, just after graduation from the Royal Academy of Fine Arts in The Hague.

Quartair is located at The Hague Breadfactory, built in 1902, on the Toussaintkade in The Hague. The monumental building is managed by Foundation B141. In the building 12 artists have their studios, and on the ground floor is a gallery space of 200 m2. The building was renovated in 2010.
Quartair is one of the longest running artist-run-spaces in The Hague.

Yesterday I installed The History of Progress, Violence and the Modern Spectacle as part of the show Ghost Modernism. We exhibited an earlier incarnation of the show at Bose Pacia in DUMBO a couple of weeks ago. I revised and shortened the statement about the series for a wall text and this is what I wrote:

A History of Progress, Violence and the Modern Spectacle is a series of paintings that address the advancements of technology during the early phases of the modern era and its relationship, either directly or as a subtext, to the “spectacle” of violence. By pixelating the photographs, the images become both abstract and “representational” depending on the viewers proximity to the work, straddling the line between two forms of existence. The paintings in this way exemplify pure information, a visual digitization of the gap between what we perceive and what is real.

This work is part of a much larger project created in 1999 called the Associated Artists for Propaganda Research, an “organization” of one that uses politics, collectivity and dissent as tools for artistic expression.

I’m not using the Associated Artists for Propaganda Research in the title because at this point I think that it would just confuse things. I decided to use it in the end though so that it get’s a proper context.

Here’s an installation shot of the painting’s on the wall. 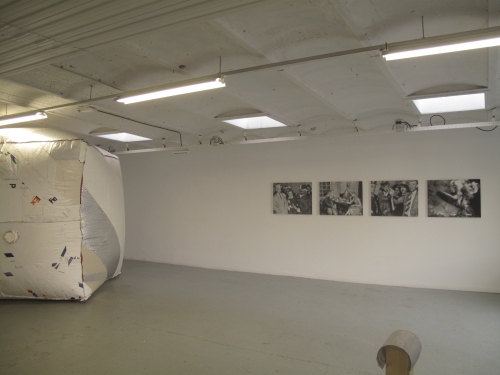 A Theory of Progress Installed Collage

Here’s a collage photo that I made of what A Theory of Progress (X) would look like installed in a gallery. The angles are all wrong and I sort of like the “lameness” of the execution. I see architects doing this a lot when they make their proposal collages. Somehow I think it’s acceptable. I’m thinking about using it for a proposal for some exhibition opportunities.

Also I was rejected from Socrates Sculpture Park again for my proposal for 186646591. It’s not too surprising to me; I’ve had almost every application that I’ve submitted for the past 4 years rejected, which is a lot in my opinion. I’ll probably keep trying but I’m skeptical and disheartened by the process at this point. I guess I have to learn to tell a better story. 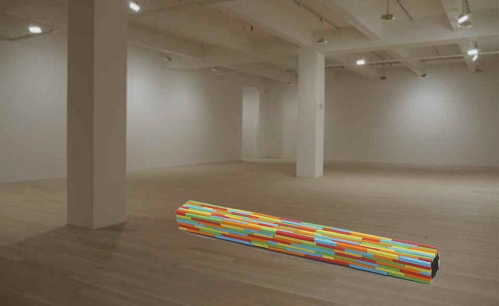 Tagged as 2013, A History of Progress, Digital Collage, Violence and the Modern Spectacle