Tag Archives: Opposition and Sister Squares Are Reconciled A Theory of Forms and Ideas

Here’s the statement that I came up with for both series. I had to keep it under 200 words so I cut a bunch of things out. Below that are the 8 slides that I submitted.

My artwork utilizes small-scale models that are simultaneously abstract and reminiscent of 1960s minimalist sculptures. The sculptures inherently create an awareness of scale that shifts the viewer’s relationship away from traditional, monumentalized work and toward a position of enhanced intimacy.

The sculpture series A Theory of Forms and Ideas takes its name from Plato’s concept of idealized form which postulates the existence of a “reality” inhabited by the ideal or archetypal forms of all things and concepts. This series uses fragments of old black and white corporate logos as a basis for creating objects in three dimensions. Each sculpture was first rendered in pencil using traditional three dimensional drawings techniques before being cut out, glued, sanded, primed and painted with flat black spray paint, creating a refined and dullish surface.

Opposition and Sister Squares are Reconciled references Marcel Duchamp and Vitaly Haberstadt’s book of the same name, which explores and explains various effective strategies for the endgame of chess. In my sculpture series, negative space and isometric perspective are used to deceive the eye into seeing positive forms, further enhancing the perception of form as a malleable and therefore untrustworthy way of truly seeing objects. 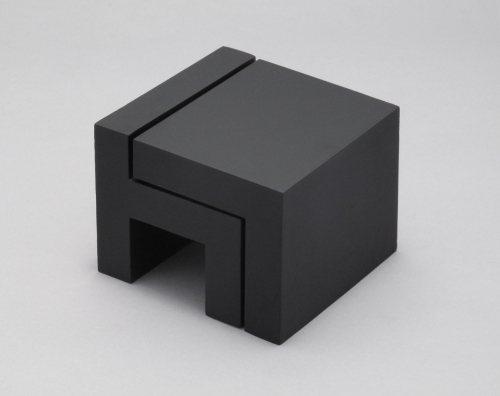 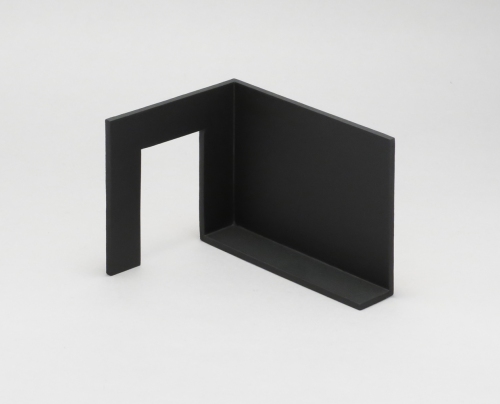 Tagged as Minimalism Elite, Opposition and Sister Squares Are Reconciled A Theory of Forms and Ideas