The Pleasure of Deceit

Yesterday I finished the painting The Pleasure of Deceit. It is 36″x48″ and is made with a gray acrylic latex background and green gouache.I started by drawing the image first and projecting it onto the canvas and marking all of my corners and intersections. I used a ruler to make my lines and then used very thin tape to mask out the white lines that make up the object; I usually don’t use tape to make my lines because it leaves a raised edge that I don’t like, which is what happened here, but time was of the essence as they say. I back painted over my tape with white paint and then rolled gray paint over the whole painting. After it dried I pulled off the tape, filled in any areas where the grey paint bled into my lines and then painted my green gouache over the white. I couldn’t get the blurring effect that I wanted between the acrylic latex and the gouache so I ended up using water to thin out my edges and I allowed some of the green residue to remain on the grey background which created a glowing effect.  I originally planned for the image to be the other way around but I found that when I flipped it my eyes wanted to switch the perspective of the object which is what I had initially intended for the piece. I made the painting because there was a space at the back of the gallery that needed to be filled and I wanted to make a painting that incorporated the painting techniques that I used for Burning From the Inside and From Safety To Where…? and the optical illusions that I was dealing with in the series Opposition and Sister Squares are Reconciled. The image is taken from a section of A Theory of Forms and Ideas Isometric Perspective Pen and Ink Drawing #17. 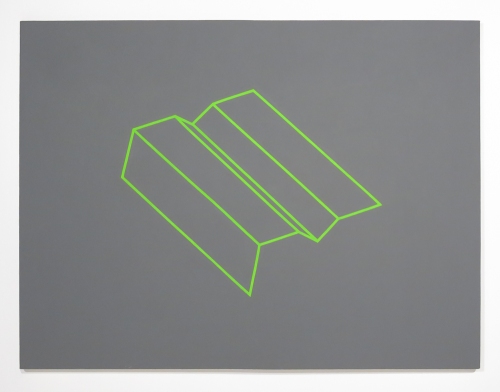