Yesterday I installed at a gallery up in Rensselaerville called Way Out Gallery that will be showing from September 27th to October 12th. The curators came to see my studio about 8 months ago and they liked the A Theory of Forms and Ideas Small Scale Sculptures and the gouache paintings and some of the other minimal work that I had been working on so I decided to center the show exclusively on a minimalist aesthetic, combining work from both Future Living Projects and Minimalism Elite. I knew right away that I wanted to show The Architect’s Tomb, Journey Into the Realm of Reason and From Safety To Where…? since I had never shown them before and was excited for the opportunity to exhibit them together. I decided that I wanted to remake Burning From the Inside but make it the same size as From Safety To Where…? and using the same gouache and acrylic latex technique. I destroyed the first Burning From the Inside when I moved from my studio in Brooklyn because of dark spots that showed up after I varnished it which for me ruined the flatness of the surface. I also wasn’t happy with the hard edges or the plastic feeling that you get from acrylics.

I decided also to make another new painting for the back wall that is approximately 3’x4′ called The Pleasure of Deceit. The image comes from a section of one of the isometric perspective pen drawings from A Theory of Forms and Ideas series. I was originally interested in making a painting that used the same distortion of optical perspective as the Opposition and Sister Squares Are Reconciled Pen and Ink Drawings but settled on an image that, although I thought only partly created the illusion I was looking for, was nonetheless more interesting.  I was originally going to make it black and white so that the only color in the show would be Journey Into the Realm of Reason but I decided that wanted it to have a specific color combination and to sacrifice the original concept for the show in favor of making a better and more interesting painting. I actually haven’t finished the painting yet and I plan on finishing it and installing it right before the opening.

I’ve been working on some statements for each piece and I’m calling the show Future Perfect which means “of or designating a verb tense or form indicating that the action or state expressed by the verb will be completed by or extended up to a time in the future.” I’ve been having a difficult time creating a context for putting Minimalism Elite and Future Living Project’s together so I think that it will be easier to just say that they’re from 2 separate but aesthetically related projects. Burning from the Inside and From Safety To Where…? actually exist in both projects.

Below are some photos of the show at the end of the installation. I framed all of the A Theory of Forms and Ideas Gouache Paintings individually and installed them so that 16 were on one wall and 8 were on the other. Ten of the A Theory of Forms and Ideas Small Scale Sculptures were installed in the middle of the gallery on 3 pedestals. I also decided early on to not install anything above The Architect’s Tomb to give it space and the curators snuck in one panel from the ICB series which I brought as an alternate for one of the walls. It turns out that it yellowed and the blue pen has started to fade but we hung it up anyway. At the bottom is a computer simulation of what The Pleasure of Deceit will look like. 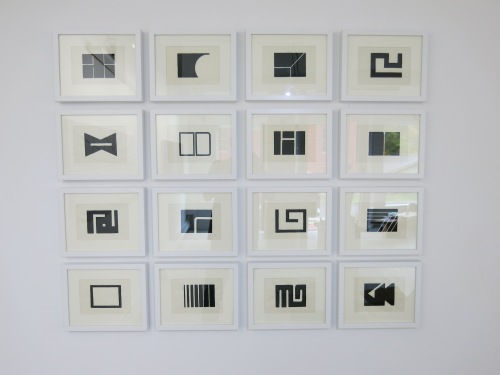 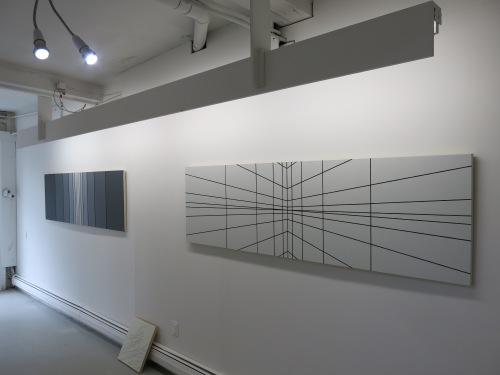 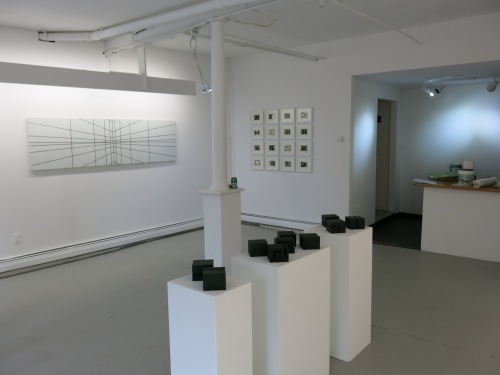 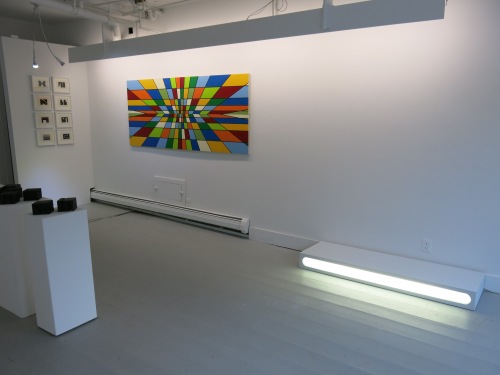