Here are all 4 sculptures in the A Non-Representative Model for Incomplete Ideas (Intricate Structures) Small Scale Model series. Number 1 is at the top and number 4 is at the bottom. This is another series of work that I find exists a little on the outskirts of what is acceptable as art. These pieces probably can’t be used in any submissions for exhibitions since they have no real obvious relevance to any of my other work and they hold very little physical presence as objects. They don’t possess what is considered a “Wow” factor meaning that they don’t excite the viewer visually with stimulating qualities like being “oversized”,  super shiny or brightly colored or possess illusions that trick the eye. This also puts me at a disadvantage since I’m not interested in developing a cohesive body of work that is both recognizable and easy to commodify and I’m not interested in placating an audience with fancy well-thought out art objects who’s main interest is impressing them without any critical meaning or thought.

While working on the models I thought a lot about the role of design in art and how it has become a major aesthetic concern, not just as a seemingly subconscious necessity for a lot of artists, but for the art market/institution as an aesthetic ideal that should be perfected and followed unquestionably. Because of this I’ve developed a certain distaste for design (in art) and I distrust its intent, likening it to the same qualities that capitalism possesses within economics as a “predatory philosophy”. Here is something I wrote about it recently:

Most art problems exist as design problems. What differentiates design from art? Design in the end represents capital as a manifestation of ultimate gain through optimization, both through a “perfection” of the visual composition as it relates to the “idea” and of its purpose for a “practical” and widely distributed use. The difference is minute and is perhaps a philosophical problem wherein the divergence of differences is buried deep within the intent.  I also think that in effect, on a basic level, that designers are interested in solving problems ie solutions whereas artists are or should be interested in questions perhaps without answers or solutions.

For this series I was interested in creating well crafted and intimate objects that needed to be viewed up close. I also wanted to use design as an un-escapable element, making it the main focus of the compositions. In this way I think that #2 and #4 are redundant and I can probably eliminate one of them from the series but maybe a little redundancy is good.

I found this un-used title in one of my notebooks the other day from 10 years ago that I thought sounded a lot like the title that I used here: A Concrete Appearance of Transparent Philosophical Ideas. 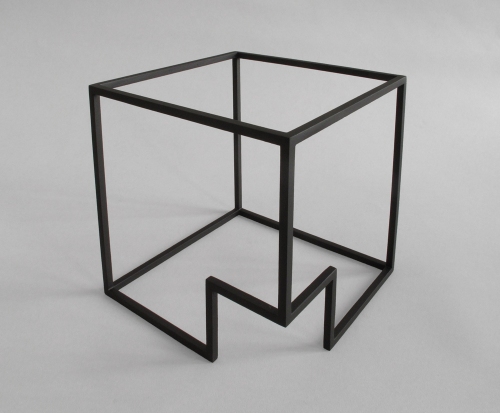