Today I made a small scale model of A Theory of Progress based on the gouache and pencil drawing that I made the other day. I decided to make it using half inch square pieces of wood that I found at the art store instead of out of mat board. I started by cutting the longest strip first at 2 and a half inches representing 5 squares. I lightly sanded the edges of my cuts and picked the best sides to leave exposed. I marked off my squares and labeled them according to the painting and painted them with the same gouache colors that I had previously used. When I was done with painting the squares I used a black felt tipped marker and a straight edge to make all of the black lines at the edges. Luckily I realized before I got too far that I shouldn’t put lines across the top except for the edges that are going to be butted up against another set of squares. That way I wouldn’t have to worry about the black lines not matching up and when it was all put together I could put my black lines across all of them at the same time. I did the same thing for both strips of 4 squares and again for both of the strips of 2 squares. I glued them together, clamped them and let them dry. In an hour I took off the clamps and finished by making my black lines across the top with a ruler.

Also I decided on the title this morning which comes from a category of Walter Benjamin’s The Arcade’s Project which focuses on a critique of the nineteenth century parisian bourgeois as experienced through the centers of consumerism, the arcade. This piece reminds me a little of some of Liam Gillick’s colorful plexi-glass pieces.

Here’s a shot of it in my studio on a home-made pedestal and another that will probably be the final photograph for this piece. 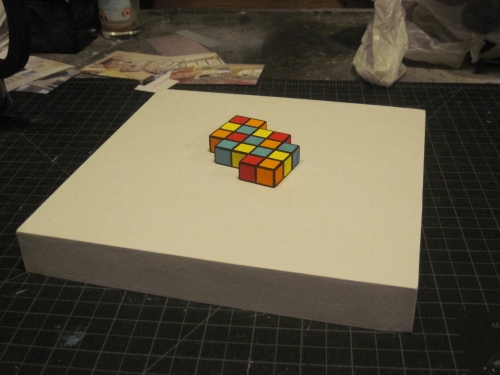