In 2004 I sent images to Hallwalls Contemporary Arts Center in Buffalo, NY in the hopes of getting considered for a show there. About 4 months later I received a call from John Massier asking to speak to the head of the AAPR. I quickly confessed that I was the sole owner of the AAPR and John and I had a conversation about his interest in having the Associated Artist for Propaganda Research exhibit at Hallwalls. At the time of my application I had sent slides that represented both the Future Living Projects and the Associated Artists for Propaganda Research. He was actually more interested in the FLP but I convinced him of my intentions with the AAPR and we made plans for a future exhibition. I was told that Hallwalls was in the process of moving and had a planned move in date sometime in 2005 in a renovated church owned by Ani DiFranco. I was slated to be the first show in the new space and I was excited. I was sent floor plans and I made a small model out of foam core to better visualize the project that I planned to build. I decided that I wanted to build an exhibition around a nuclear explosion that featured a city. The title Epicenter City came to me quickly and I started building.

The first obstacle was the shape of the floor model that I was going to build since the space that I was in had a wall that swung on a movable axis. Based on the floor plans that were sent to me I established a concrete and workable shape for the city and planned accordingly. I started building using an 4’x8′ sheet of smooth plywood as a starting point. I wanted to incorporate water into my city planning and made a waterfront industrial park as my first complete panel. I used wood scraps scavenged from the woodshop dumpster from the third floor of my building. I cut them into small blocks and glued them on to interlocking pieces of matte board. I also cut out “docks” out of matte board and attached foam trees to cover any imperfections. I learned the matte board technique from the Queens Museums’ Panorama of NYC which used a similar process. I was lucky enough to have a friend (Vandana Jain) exhibit a piece on the panorama as I was planning this project and one night, during installation, we all got to walk out on it. I was able to view its construction up close and we also took the time to take some “promotional” photos of the AAPR as a group which I still use to this day.

I finished one 4″x8″ sheet of city landscape and spray painted the whole thing with a neutral gray (I made sure to buy many cases of the same gray in order to maintain consistency in the landscape.) During this process I also decided that I wanted to include a large pixilated painting of the first portable atomic bomb called the Davy Crockett. I decided on making it in 2 panels to better manage the size of the final painting and to enhance the fact that the subject matter was the split atom. The painting would be 6’x8′ when it was finished and I decided on acrylic paints to hasten the drying time during painting. I have used this same technique many times since but this was the first time I had decided on this approach.

Around the time I was starting the painting John wanted some photos for promotion. I quickly took photographs of the finished 4″x8″ panel cityscape that I finished and a model of a water tower that I was working on that said “Epicenter City” on it. Here is a photo of the foam core model I made of Hallwalls new space with my floor piece in it (in grey) and the miniature Davy Crockett painting that I planned on making, the model of the water tower with “Epicenter City” on it (on a a gridded out, but not yet started Davy Crockett painting), and the first panel which has a thumbtack stuck in it that I forgot to take out. Also 2 photos from the night of the Queens Museum Panorama shoot which features me, Ben Knight, Mike Estabrook and Vandana Jain. 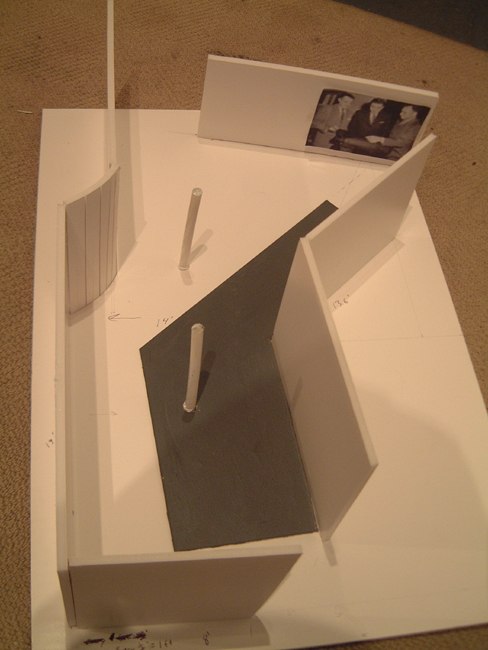 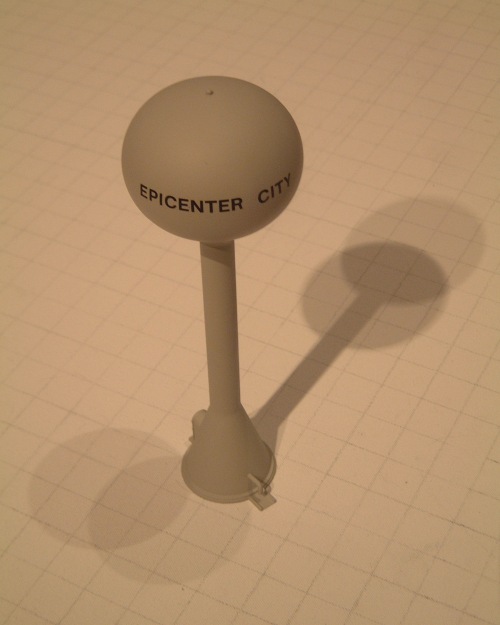 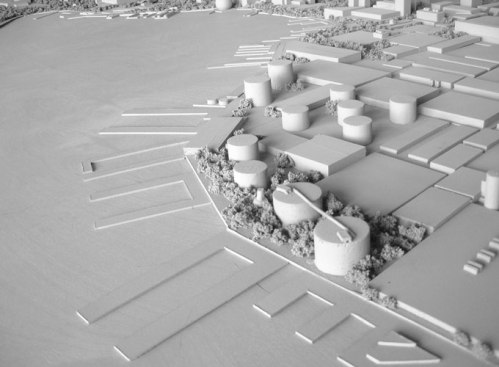 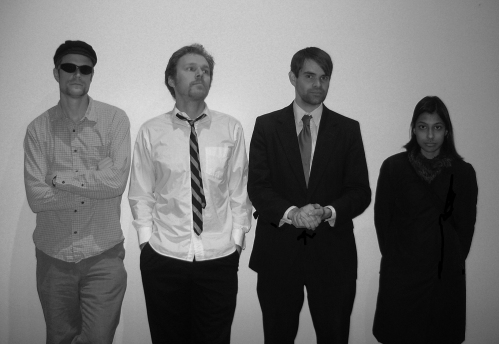 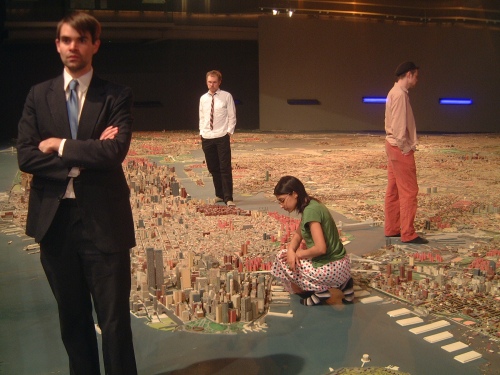