I gridded out a new 24″x32″ pixel painting last night with half inch squares. I have an idea for 2 new ones, one being an image of a family of mannequins used during the Trinity test (atomic) and the other is of an overflow FBI file room housed in a roller rink. I’m going to make the mannequin painting first and I’m not sure about the second one. I like the idea of bureaucracy as a subject matter and I like the image but the mannequins fit in with the ghost modernism theme. I knew that I wanted to use an image from the Trinity Test and really liked this image of a seemingly normal modern family. In actuality they’re about to be blown to smithereens to see how the atomic explosion affects them. I took some screen shots of the images as they would look pixilated. In the mannequin photograph I took out the exit sign on the top right because it didn’t look right after I pixilated it. I’m a little hesitant to work on more pixel paintings but I need to do at least one more for the show in The Hague. I’m thinking about excluding the painting of the Hindenburg from the show and only including the paintings that have a number of people in them. 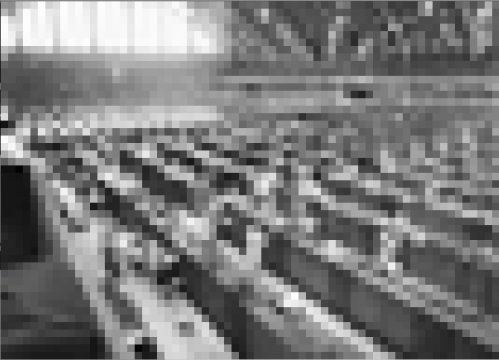