The Message Was Clear

The Message Was Clear is another painting that I made this summer. It’s from a photo that I took in China a couple of years ago and shows an empty rusted sign with a grey sky behind it. The original photo has Chinese characters on it and some numbers which I removed in the painting; I was more interested in the structure of the sign as it related to the sky than in the content. This is another 24″x32″ painting and I started by the background with a flat grey acrylic latex. Then I sketched in the slats. I experimented with using burnt sienna water color over the latex and discovered a perfect effect for creating rust. I found that by varying the amount of water that I used I could create a good variation of opaqueness. For the solid areas I found that I needed to paint it 5 or 6 times to get it totally solid. It was important to use the right brush, and I soon found the best technique for creating straight solid edges by starting at the farthest point and pulling towards me, always painting the left edge. I would then turn the painting 180 degrees and do the same thing and then fill in the middle. I did this until I was done. It took about a week off and on. When you are close to the painting, I found that the thin straight lines create an almost psychedelic effect. 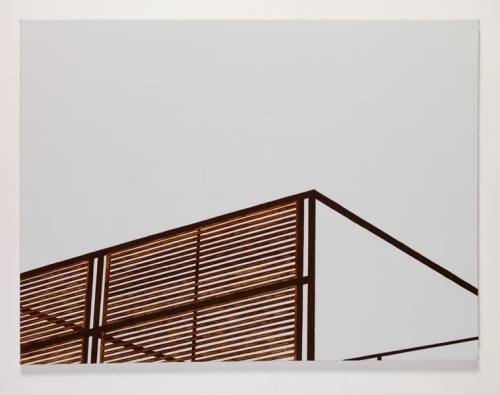